When I picked up Cormac McCarthy’s to be Pulitzer Prize winner a few years ago, I didn’t put it down until five days later, when I finished it. This unfinished novel transports the reader into a post-apocalyptic world with no explanation at all. Critics praise the film’s adaptation of these striking apocalyptic elements, and while visually stunning, they merely form the backdrop to The Road. To be fair, the film does preserve the story, an inexplicably profound, gripping, and exhausting survival narrative of father and son.

Like McCarthy’s other work, the power is in the story, not in the words. The reader gets the feeling that the story does not exist for the occasional philosophical flourish, but rather the philosophical statements exist for the story. People pick up immediately on the father-son dynamic, a social commentary on the importance of family. McCarthy extends this theme when the boy pines for play with other children. He’s desperate for community. Father and son is not enough. But there’s much more happening in this story than a father-son theme. McCarthy offers some help. In a recent article, he is cited as asking producer Hillcoat to do one thing in his adaptation of the book to film—“Keep the references to God in.” The interview with Hillcoat reveals a spiritual impulse in McCarthy, which will come as no surprise to his readers.

The Road is both literal and figurative, a broken path (sometimes dust, sometimes highway, other times, mud) followed by father and son as they move south, to the coast. Along the way, they are threatened by other, less kind survivors, as well as their own starvation. Looping the same basic subplot, the story carries father and son off the beaten path into abandoned houses, looking for food. Food is not always what they find. Yet, they survive. Survival, however, comes at a high cost, especially for Dad.

Keepers of the Fire

We sense the father’s humanity slipping away, as he fights to live and to lives to protect his son. His son protests this decline, inquiring if they are still “the good guys”, if “we will always be the good guys, no matter what?” This morality is tested over and over, just like our morality is tested every single day. Will our morals outpace our instincts or will they bow beneath the weight of survival and suffering? The roaming couple find deeper resources for “the good” by being “keepers of the fire.” This enigmatic phrase has been interpreted as a cryptic reference to the soul or to culture, the human proclivity to create culture out of creation (make music, tell stories, produce food). I wonder if we are meant to see a combination of the two.

Excluding culture from spirituality, and spirituality from culture, is a persistent error in both religion and society. As early as Gnosticism and as late as Fundamentalism, Christians have often failed to embrace the cultural imperative in the foundational chapters of the Bible. Secularists fail to see the utterly divine impulse behind our proclivity to create. Keeping the fire requires a unique integration of faith, morality and culture. Pulling at one strand will inevitably lead to an unraveling of what God has so majestically woven together.

A Deeper Story
The film does a remarkable job preserving the story on screen, despite the various elements that are stranded. One such element is the final three paragraphs of the book, where we see the themes of relationship, faith, and culture come together. As the son sobs for his father, a woman reminds him that: “the breath of God was his breath though it pass from man to man through all of time.” A strong allusion to the creation of Adam by the breath of God (Genesis 2:7). Arising from creation is the divine impulse to relate, to love, to commune with one another.

Without hesitation, this theological anchor is dropped and the cultural ship sets sail. The next line reads: “Once there were brook trout in the streams in the mountains…polished and torsional. On their backs were vermiculate patterns that were maps of the world in its becoming. Maps and mazes.” McCarthy returns us to Eden, the pre-apocalyptic environment of a pristine creation that foreshadows culture, where fish remind us of maps. But the world has changed—immoral, a seemingly permanent injustice: “Of a thing which could not be put back. Not be made right again.”

The dereliction of the boy’s world, adjacent to the memory of an earlier world, remind us that things are not as they are supposed to be. These closing paragraphs push the story beyond its own pages into a story deeply embedded into the soul, to a world where faith, creation, and relationships are divinely bound in delightful permanence. To a place where we we long for everything to be put back, to be made right again.

In 2006 Cormac McCarthy’s novel The Road was a deserving Pulitzer Prize winner. I read it in five days. The film was supposed to release last year but didn’t. Books with the movie covers were printed but still no movie. 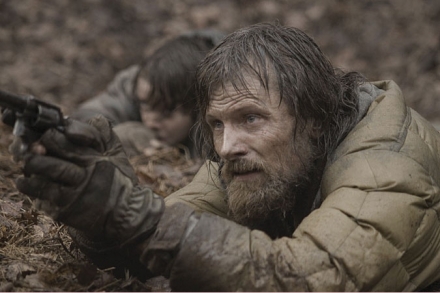 If you’ve been wondering if the movie is going to release….it is! In theaters this October with Viggo Mortenson, Charlize Theron and some great shots of post-apocalyptic America.

Read all about it here. HT:SM

Not as insightful but helpful NY Times review.

Man, I started and finished The Road by Cormac McCarthy this afternoon. A post-apocalyptic page-turner. Wow.

Thoughts to come…feel free to leave yours…