So much tragedy, loss of life, chaos and utter destruction have combed the countries of the earth in recent months. From the 7.6 earthquake in Pakistan to the home-hitting hurricane in New Orleans, LA, the peoples of the earth are being ravaged. Of course, there are the oft forgotten tragedies of 2 million dead in Sudan, 100,000s in Cambodia, the victims of the SE Asian Tsunami, the list could go on…locust plague, mudslides, bird flu, famine, AIDS, TB and Malaria related deaths all over the 2/3rds world. For a mind-blowing graphic of current global natural tragedies go to:
http://www.alertnet.org/thefacts/satelliteimages/112896808959.htm

What are we to do? What is the Christian response to this collosal scale of suffering and death? Perhaps praying Psalm 40.1-3 for these victims would be a good start:

I waited patiently for the Lord he inclined and heard my cry
He brought me out of hte pit of destruction, out of the miry clay
He placed my feet upon a rock and made my footsteps firm

He put a new song in my mouth, a song of praise to our God
Many will see and fear and will trust in the Lord.


This is precisely what is happening in Pakistan. This morning I recieved reliable correspondence from Pakistan regarding some of the christian response to the devasataion of hte earthquake. Enclosed in the email was a story, which reminded me of Psalm 40 and motivated me to pray that it’s refrain would be sung throughout the nations of natural disaster. I am enclosing an excerpt of escape from the earthquake and praise from Pakistan:

THE STORY OF “EMANUEL”-(as told by Bruce, an Muslim Background Christian leader)

I was walking with people everywhere, hearing screaming and other noises from destroyed houses. Everyone was busy trying to help. I saw a 2 year old baby boy. This little boy was screaming out, saying that somebody should help him. I went close to him and saw that he was stuck in the rubble. Only his head and one hand was sticking out. He said to me, “uncle, save me!”

Brethren, believe me, this situation seemed impossible for me alone to get him out. But I reached for him and started pushing the wall. I tried a lot but this wall was very heavy. I tried again and again. It was hard for me to see this boy stuck and bleeding, and he also was continuing to cry out, “save me!” Finally I sat down and told the boy to ask the Lord Jesus to help him. I told him that Jesus could help because I couldn’t. He asked me with his little mouth, speaking in the Pushtu language, who Jesus was. I said that He is the Most Powerful Lord God (speaking in his Pushtu language). He then started asking Jesus to help him. I then told him that when I say JESUS, YOU ARE OUR HELPER, then repeat this phrase with me. I then told him that I would try to push the wall, but that Jesus would actually move it. Brethren, after one push against this wall that weighed about 1.5 tons, the Lord Jesus picked it up, as if He was picking up a book! I then quickly moved the boy out. I later told this boy that his new name is Emanuel.

How long shall we sing this song? Until the peoples of the earth praise Him forever.

Today I blew it. I spoke rashly and harshly towards my wife, my fellow parent, my co-heir in the grace of life. What would compell me to do such a thing? Selfishness. Whether I was right or wrong in the discussion doesn’t really matter. I “lost” the argument when I spoke unkindly. Sure, I quickly asked for forgiveness, pointed out where I was wrong and she was right, but the wound was inflicted and the transgression enacted. Sin hurts. It hurts me and it hurts her. But more- its God-defying activity, an in-your-face move by once poverty-stricken, deathly ill orphan towards an infinitely generous, loving and always thoughtful Father. Sin is illuminating.

Today I got too see myself a little more clearly, as if the fog was cleared from my bathroom mirror just a bit more. Hideous I tell you. Hideous but hopeful. What I saw today wasn’t as bad as what I saw four years ago. Grace. Grace wiped the fog from the mirror and grace changed what I saw. Grace showed me sin and sin shows me grace.

“What is man that you are mindful of him, and the son of man that you care for him? (ps 8.4)” According to Bildad, the son of man is a worm (job 25.6). Worms are grotesque, insignificant and small. So am I when sin rules over me. When the son of man behaves as he was created to behave- to rule over the works of God’s hands with his wife and not against her (ps 8.6), he displays his crowning glory and honor, his God-like design. When we behave like Christ and not Adam, we rule over our sin and with our fellow humanity. Since Adam, the mirror has always been an awful thing to look into. I must learn from Cain, to rule over sin and not to be ruled by it (gen 4.7). Moreover, when we become the mirror and reflect our Creator we begin to resemble our destined image, the glory of Christ (2 cor 4.6; Col 3.10).

All too often my Calvinism is only skin-deep. Five points paraded around an awfully pompous person . A limp, lifeless tulip (nevermind the other two points). Of course, its the doctrines of grace that give a worm hope. In fact, they move the worm from sinful soil to grace-filled ground, from beneath the earth to ruling over it. God is patiently restoring his image in me, the reflection will get better because the image will become the mirror, the worm will become like Christ, changed from one degree of glory to the next. When sin is illuminating, grace is well-lit. 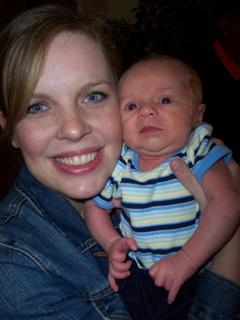 Robie and Owen at 1 month old

I’m about a hundred pages into Tom Wolfe’s I Am Charlotte Simmons, a novel based on Wolfe’s observations and reflections from an excursion across the American University campus. The picture, so far, is a rather disquieting one. According to Wolfe, contemporary university life is more about getting laid that getting an education. The hedonistic character of our universities set forth in Simmons is striking. Striking because of the failure of the American appetite for happiness. Apparently, students are not too interested in the things of life, culture, truth, meaning, the future of humanity and the world. As C. S. Lewis put it, “They are far too easily satisfied.”

However, there is a shimmer of hope in the character of Charlotte Simmons, whose redneck roots are humiliatingly exposed by her roommate’s upper class unction. Although the first 100 pages reveals rampant decadence as a driving force in university life, they also sketch a picture of hope for the ‘down and out’ demographic in America. The subtle message might be, “If Charlotte Simmons can make it to Dupont, anybody can.” You see, Simmons is bright but poor, qualified but ‘uncultured’. Charlotte concieves of ‘eating out’ as a trip to the “Sizzlin Skillets.” Co-ed bathrooms horrify her (rightly so). She wears keds when everyone else is wearing flip-flops. The point Wolfe is getting at is that the poor, the underpriveleged go to the Harvards too. Ivy league doesn’t mean class distinction.

However, the only problem with his point is that statistics show that of the 146 select colleges, only 3% of the student body come from Charlotte’s economic bracket, which raises some interesting questions. Is poverty next to stupidity? Or does uppity flee from humility? Is Wolfe’s novel a farce, fiction, fact or the future? What’s the point here? Can anybody go to Harvard, provided they make the grades? Apparently not, since a large portion of Harvard students are admitted on clout and class, not grade and gumption. What’s the future of the American University…of students and professors alike? I guess it’s hopelessly tied up with the future of I Am Charlotte Simmons? We’ll see…